The Ghost of Student Counseling

Dye-based printer ink, potentially with a little water, makes for a surprisingly good fountain pen ink. Never stick pigments in your fountain pen. Heck, perhaps you shouldn’t put printer ink in any fountain pen over €5 or so. Anyhow, here’s a little doodle drawn in printer ink, with some quick Inkscape post-processing.

Just a quick demonstration of the power of openclipart.org. I dubbed my “personal cloud” experiment kluit: a Dutch word meaning both clod and the ball of earth around the roots of a tree. In other words, kluit is firmly grounded because you’ve got your own ground with you wherever you go. Be like Dracula. With a name in mind, I also wanted a matching logo. Following a quick search for leaves, root (or was it tree) and after a little initial play something like attraction, this is the quick and satisfying result.

My kluit currently consists of FreshRSS and Syncthing. Probably soon to be joined by Wallabag.

And of course the remix is free for all. Enjoy.

Messing about a little in Inkscape with my wife’s Wacom CTH-680S tablet on Linux 4.1, after first trying it in Xournal. It seems to be functioning a fair bit better than a few kernel versions ago.

The tablet is really good. I’d recommend it.

Some of you may be aware that I often imagine things in random shapes that other people have trouble envisioning, sometimes even after I draw them out. On June 3rd my wife and I baked tiny pancakes, and here’s what I saw in two of them.

Note, these are animated SVG images. At the time of writing they only render correctly in Opera and Webkit browsers, whereas Gecko displays a static image. Internet Explorer is served with fallback PNGs.

Late April 2009—I just realized that’s not as long ago as it feels—I drew Space Dino, purely for personal reasons. I wanted to give a shirt as a gift, and I also wanted to wear a shirt with a design by yours truly on it. I put it on PrintFection because if I got one female’s shirt, one dark green male shirt and one white shirt, the white shirt would cost practically nothing. The prices were slightly cheaper back then, as I recall. All three t-shirts I bought—one female, two male—ended up really nice. I never posted Space Dino on this weblog, so I figured I should remedy that. After all, it’s the best place to collect some of my thoughts and creations in one place. I also have all of my image files backed up on several hard disks, but that’s almost entirely without context. This context already gave me a pleasant surprise. As it turns out, I’ve always liked the idea of creatures wearing some kind of space or diving gear. I completely forgot about the fish walking the land I drew over three years ago, but I just ran into it when I was looking through the Drawing category on this very site.

To accompany the “official” release of this drawing, I wrote a little introductory poem. I wanted to experiment with meter, so I started out with a four line iambic pentameter with an abab rhyme scheme. However, that turned out as boring as 12th century poetry. After some revamping, I ended up with something that hopefully isn’t half as bad. So without further ado, I give you the Space Dino poem, which explains the origin of space dinos.

They left their blissful past with ancient earth;
Barely escaped disaster to survive
in outer space; they gave birth
to the space-age dinokind.

Just to annoy you with technicalities, I decided to include a version with the stresses clearly marked.

I should probably mention that this post was inspired by one of Wil Wheaton’s rants about being creative with barely any risk. If anyone wants to obtain a copy of this shirt, I guess they should banter me by mail or in the comments to this entry. I guess I could always open the PrintFection store again, but since I would want a buck or two of the profits—that’s only fair, right?—and they only hand out American commission checks as far as I can tell, I don’t even know if I could even do anything with that over here.

Yesterday I’ve been drawing some stuff to get my hand-eye coordination between the tablet and my screen better, so I thought I’d post this one exercise. 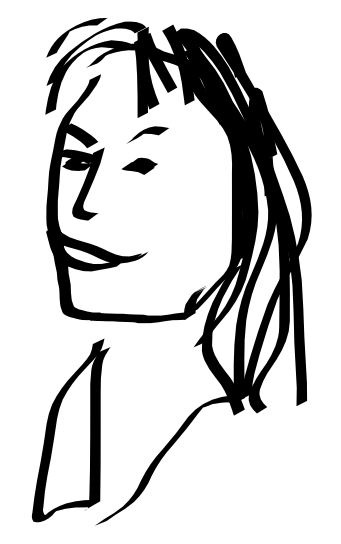 It’s a drawing of a female face with a brush which was too fat and such, but I am still kind of interested in what I could do with it without actually redrawing it.

I haven’t posted to my weblog for quite a while now, so I’ll give you two vector images I made today in about 30 minutes using Inkscape. Note that I never really used any vector creation program before, so I’m quite pleased with the result so far.

Remember the fish I drew which I wrote about earlier today? Well, when Joey saw it he created a nice image blend based on it.

Not much later, when I linked someone else who had seen both of those images to a painting by Rembrandt van Rijn of Europa, she said she was looking for my fishy in it. So I decided to take the initiative and I made a quick manipulation of the picture.

Then I suddenly realised it could work quite well as a meme. In case you’re interested, I saved what I used in the painting as a transparent PNG. So if you’re interested in making my fishy into a meme, I doubt it could get any easier.