We have two rabbits running, eating and shitting around on our patio. Their names are Flokkie and Johnny Walker. Their lives are coloured with tragedy.

A little less than two years ago, when I first came here, there were two rabbits doing their thing. One of them was called Whiskey, the other had the name of Flokkie. About half a year later, Leonie came to live here. She somehow managed to let her teckel lose and not much later Whiskey was history. 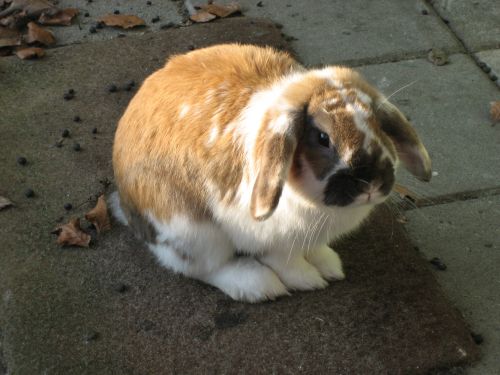 To compensate for the loss, she bought a new rabbit. After a short consideration period we decided to call him Johnny Walker, in general speech JW (pronounced something like jayway). As you probably guessed, he is named Johnny Walker in honour of his predecessor, Whiskey. 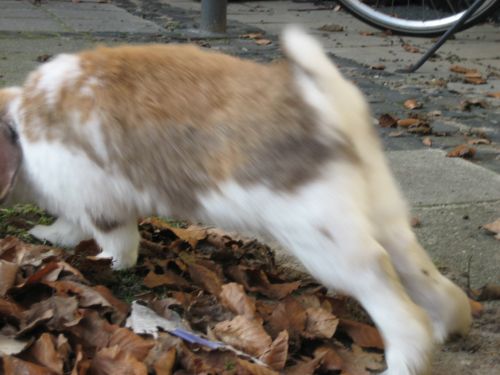 As laserlight so rightly pointed out, JW looks like a sort of a cross-breed between a dog and a cat. We already made fun of his ears from day one. But on top of that, he’s absolutely allergic to being either caressed or picked up! If you try it he runs away like he saw the devil. Therefore he is quite useless as a rabbit. After all, why else do you have one? I do however find a strange kind of sadistic pleasure in picking him up anyway and forcing him to enjoy caressing. Or perhaps I am completely wrong about the rabbit and in that case he enjoys it much more than I do. 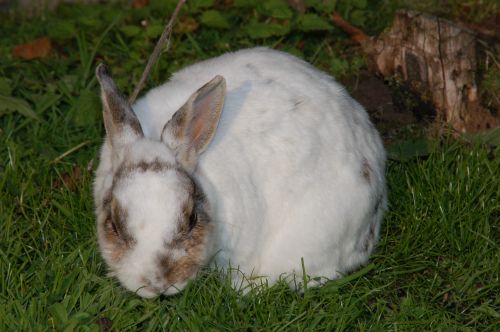 Flokkie is the oldest and most photogenic of the two. He is about nine years old. Old age is beginning to take its toll and sometimes you can hear him panting after running a bit. 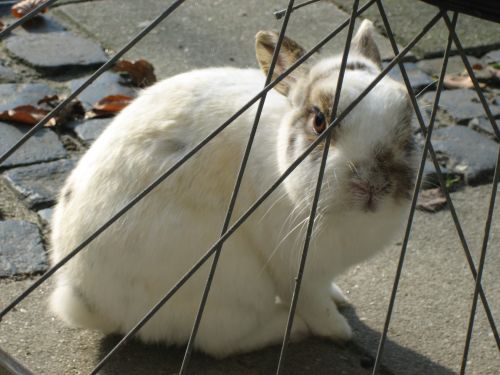 Unlike JW, Flokkie either enjoys being picked up, or is indifferent towards it. If he is hungry, he has a demanding pose where he’ll stand on his lower legs, looking somewhat like a squirrel. He also sits like that if he’s cleaning himself. Since you seldomly see JW cleaning himself, I assume Flokkie is a lot cleaner.

Both of the rabbits are a joy to roof-tourists (you can walk over the roof) and visitors. Especially the girls will usually utter statements like “wow, look at the cute rabbits!”

While JW was growing up, there were a lot of conflicts with Flokkie over their rank. Meanwhile, presumably mainly during the summer, Flokkie clearly established himself as the leader of the stack, despite JW’s bigger size and presumably greater physical power.

Neither of them likes to pose for the camera much. Nevertheless, I think these pictures capture their spirits. Of course, they do not beat my intelligent cactus, but they’re pretty cool.